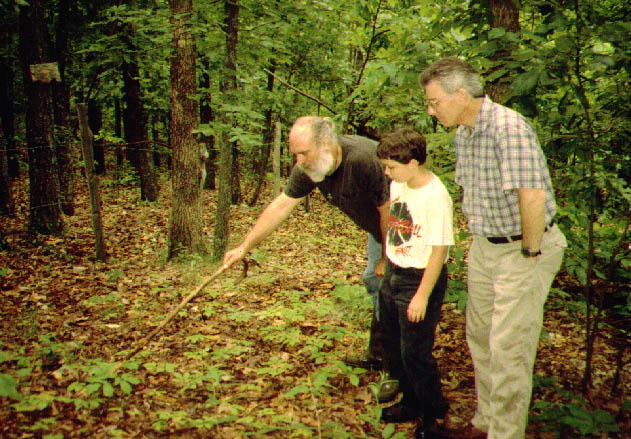 Dennis Lindberg, of Ozark Mountain Ginseng, points out ginseng plants with his son, Josh, as Mike Gold, from the University of Missouri Center for Agroforesry looks on.

Sixteen years ago, Dennis Lindberg gave up life in the big city and moved south from St. Louis to Thayer and became a farmer - a forest farmer! Forest farming is an agroforestry practice that uses the existing forest canopy to produce shade to grow products such as mushrooms, ginseng and goldenseal. Dennis is farming ginseng and goldenseal, both of which have value as medicinal plants.

Originally, Dennis practiced "wildcrafting," which means he collected wild ginseng and goldenseal, in addition to some he had planted on his farm. He learned the location of wild plants from local people. Over the years, however, he noticed a decline in the wild supply of ginseng and goldenseal in the Eleven Point River area, due to people over-harvesting and not leaving sufficient plants to drop seeds and regenerate. Because of this decline, Dennis decided to use his forestland to grow more of his own ginseng and goldenseal, starting Ozark Mountain Ginseng.

It doesn't take much land. Currently, he has about 3 acres at his own farm and 5 acres at another farm under cultivation, and has 1-year-old to 16-year-old roots. He sells some roots for medicinal uses and seedlings and roots for transplanting.

Dennis recommends that beginners do two things: First, start small and second, have a market. Ginseng and goldenseal do require work. "Learn how to do it," he says. In addition to planting, time has to be given to controlling diseases such as damping off, blight and root rot. The site, which requires 80 percent shade and is usually a north-facing slope (although Dennis reports success on south-facing slopes), needs to be prepared before planting. And it is critical to get the seeds prepared and in the bed at the right time. One farmer reported planting a half-acre of ginseng seeds at the wrong time and none germinated. One acre of ginseng requires between 30 to 100 pounds of seed, depending on how close you plant. The closer the planting, the more ginseng but also the more chance for disease. Typically, ginseng is harvested when the roots are at least 7 years or older.

Knowing your market, or where you will sell the ginseng, is critical. Dennis has built up a market for his seedlings and transplants at several locations in West Plains and in feed stores and farm centers. He also sells mature roots to a buyer who then sells them to medicinal companies. While it is a lot of work, Dennis says it is also profitable. He can sell his seedlings and transplanted roots for $1 to $2 each. The price on ginseng and goldenseal varies, depending on whether it is wild or cultivated. The wild is more valuable but also harder to find. For Dennis, the price varies between $100 to $250 per pound of dried roots. He estimates he can produce 1,000 to 2,000 pounds of dried ginseng per acre.

More information on where to get seeds, and how to plant and market ginseng and goldenseal

Josh Lindberg points out a 3-year-old ginseng plant near his house in Thayer, Mo.

Ginseng roots are priced according to whether they are wild or cultivated.