Each year the Missouri Nut Growers Association members meet to show off the best of their annual production. Samples of nuts from many varieties or cultivars of pecans, black walnuts and other native species are judged for quality. Information from these nut shows may help future nut growers select cultivars they want to grow in their own plantations. 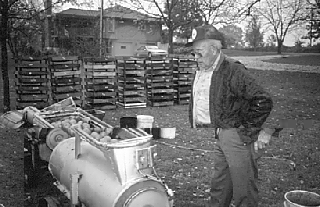 Recognition for Grand Champion pecan cultivar went to Paul Manson, of Keytesville, Mo., for a Peruque cultivar. The sample had 59.7 percent kernel by weight and weighed 75.6 nuts to the pound.

Grand Champion black walnut cultivar went to Bill Lane, of Fair Play, Mo., for his Football variety that had 32.2 percent kernel and weighed 24.5 nuts to the pound.

Grand Champion black walnut seedling was shown by Gerald Gardner, of Sarcoxie, Mo. The seedling, called "Neel #1" had 30 percent kernel and weighed 23.6 nuts to the pound.

Among the nut samples within a single cultivar category, the kernel percentage may vary by several percentage points. This difference usually reflects growing conditions and management. While the average kernel percentage of the native crop may run about 18 percent, the top selected cultivars will score as high as 40 percent kernel in some years.